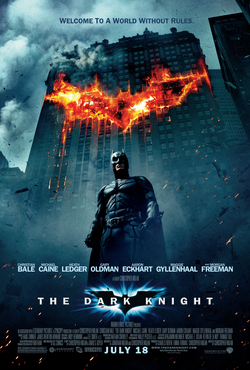 The Dark Knight is a 2008 sequel to the movie directed by Christopher Nolan and features an ensemble cast. The sequel to Batman Begins opens with a bank robbery where a mysterious villain known only as the Joker begins his terror of Gotham City.

After the DA gets leverage on the mob bosses, they turn to a force of chaos known as The Joker (Heath Ledger). This new villain is not like them. He is cunning, sharp, and not afraid of death. Even with Alfred (Michael Caine), his faithful butler’s help, he wonders if it worth continuing on as Batman as the Joker succeeds in tearing Gotham apart.

Nolan once again brings us a brilliant adaption of the greatest DC Comics character. His pacing, the score (once again done by Hans Zimmer), and the brilliant casting forges a near-perfect movie that captures the spirit of Batman and the Joker. He crafts the story without stopping or slowing down. It is brilliant and crafts a powerful story of good versus evil, love and loss, and how fickle folks can be when faced with madness.

Bale and Ledger perfectly compliment each other as protagonist and antagonist. Batman represents what is good in Gotham, even as an outlaw. The Joker represents the lowest version of the citizens. Together, they sit as polar opposites, but powerful enemies. Both actors are incredible in their respective roles as the protagonist and antagonist. Bale truly cares about the role of Batman and Ledger clearly fully dives into the role as Joker, making it feel authentic.

Likewise, Oldman, Gyllenhaal, and Eckhart all perform their roles to perfection. I will not say that Gyllenhaal was better in the role as her predecessor, but she was definitely the right choice for this film. Michael Caine is, of course, brilliant as Alfred Pennyworth and it goes without saying that Morgan Freeman truly shines as Lucius Fox.

It is a travesty that this great film was not recognized at the 2008 Oscars. While Ledger won Best Supporting Actor, this movie should have swept the board, including Best Movie and Best Director. It is a sign of the elitism that exists in the entertainment industry today and will continue to exist as long as the fans stay quiet.

Bottom line, The Dark Knight is not only a superb Batman and/or comic book film, but it is also a modern classic. Nolan brings this incredible work of cinema to life and from beginning to end.

FAVORITE QUOTE: I believe whatever doesn’t kill you simply makes you stranger.

UPDATE: The Dark Knight has officially been added into the National Film Registry, December 14th, 2020//

You can watch the trailer below:

Those are my thoughts. What do you think? Let me know in the comments down below and check out my review of Batman Begins. don’t forget to subscribe for more movie reviews like this one.